This August marks the premiere of Walk With Me in the U.S. Narrated by Benedict Cumberbatch, British actor and 2015 Oscar’s best actor nominee for his performance in The Imitation Game; Walk With Me is a cinematic journey into the world of Plum Village, communities of practitioners who perfect the art of mindful living with the Vietnamese Zen Master Thích Nhất Hạnh.

Thích Nhất Hạnh is one of the pioneer Buddhist leaders who bring Buddhism to the West. The mindfulness practices that he teaches have helped countless people transform their suffering to live a happier life. The 91 years-old teacher currently lives in the Plum Village International Practice Center in Thailand and is still recuperating from a stroke in 2014. The Mexican director Alejandro G. Iñárritu, winner of the 2016 Oscar for directing The Revenant,  described Walk With Me as “a moving and wonderful film that captures the essence, depth and poetry of Thich Nhat Hanh- a great work full of love”. Shot in more than three years, the movie explores the world of Zen Buddhist monasteries where monastic and lay practitioners practice mindfulness daily with their teacher Thích Nhất Hạnh. Footage of the monastic life is paired with Cumberbatch reading excerpts from Fragrant Palm Leaves, a collection of Nhat Hanh’s journal writings during his first years of exile from his native Vietnam.  Cumberbatch himself said of Thich Nhat Hanh and the documentary “In my life I’ve been so touched by the teachings of Thich Nhat Hanh, it was a great honor to work on Walk With Me. I have no doubt that audiences across the world will be moved by this beautifully crafted film observing the daily life of the monks and nuns who have committed their lives to the art of mindfulness.” 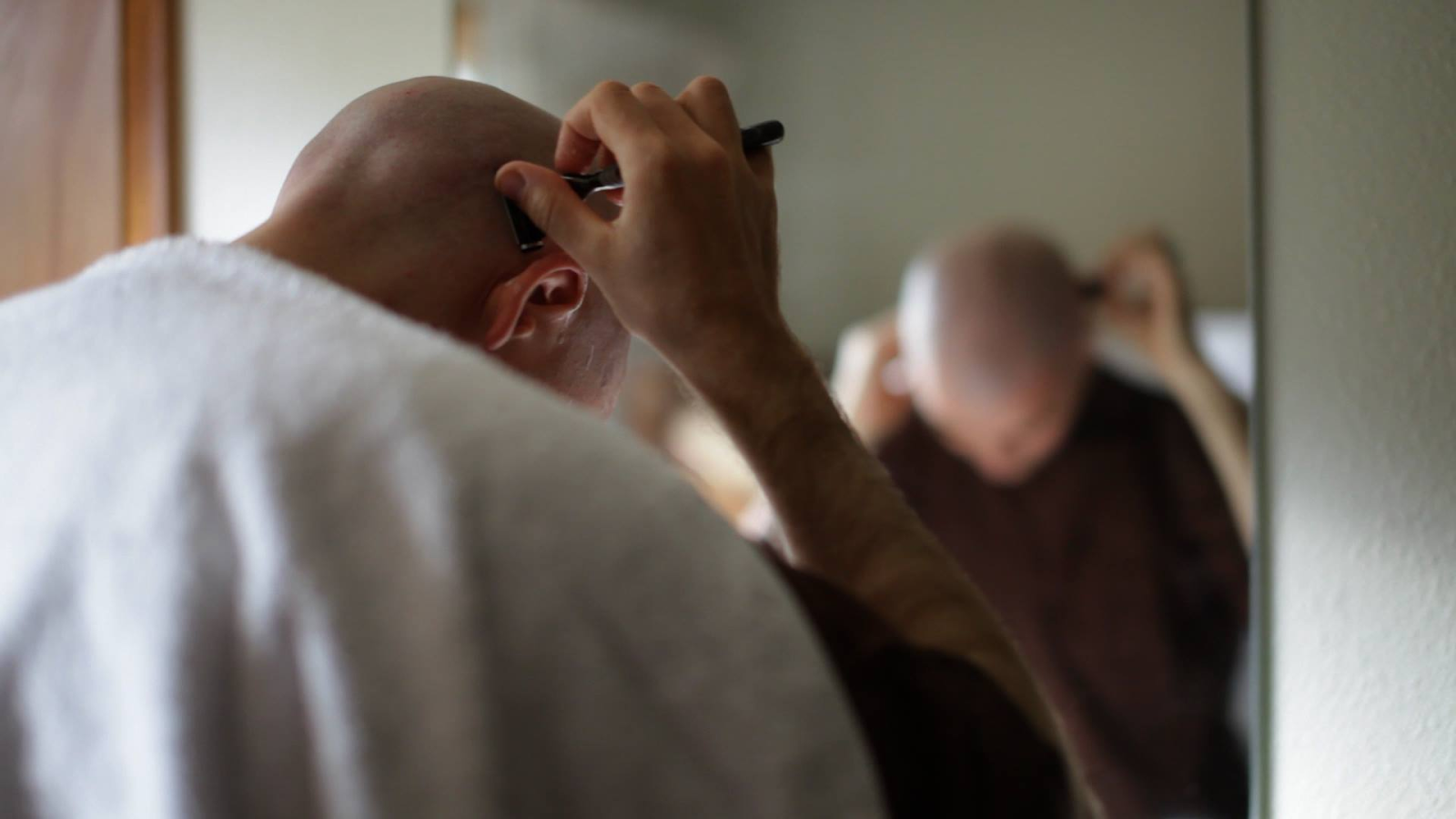 Soundtrack recording for Walk With Me at Deer Park Monastery, Escondido, October 2013. Photo from “Walk With Me” Facebook page.

Walk With Me was premiered at the South By Southwest (SXSW) Film Festival on March 15, 2017, in Austin, Texas, in the Documentary Spotlight program. The nine-day long festival gathers creatives of all stripes to celebrate artistic innovation and emerging talent from both behind and in front of the camera. The Documentary Spotlight aims to shine a light on new documentary features receiving their world premieres at SXSW. 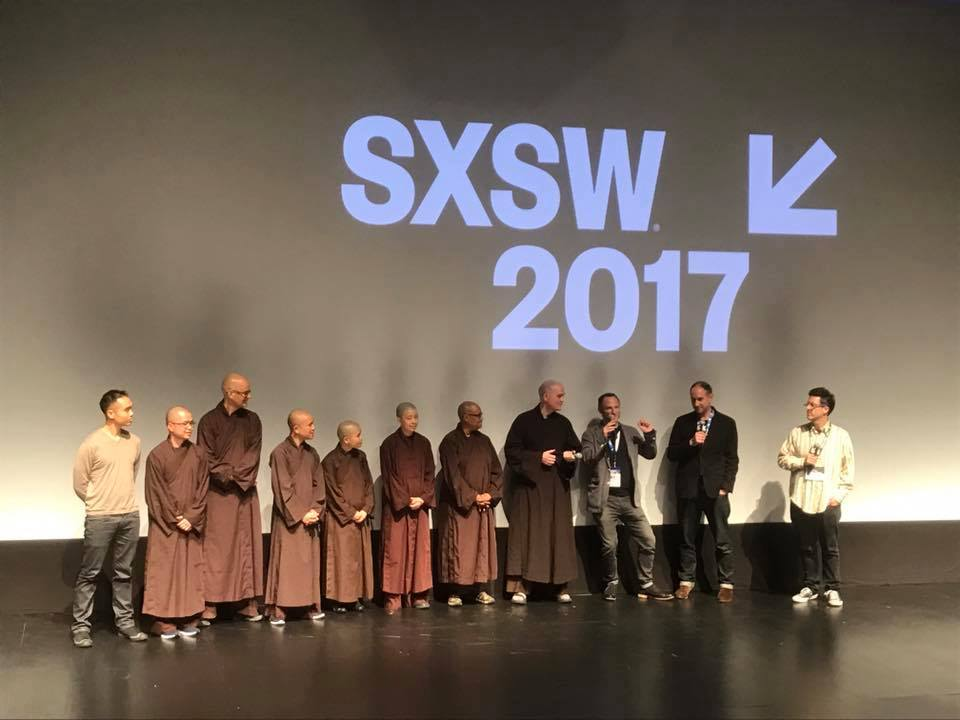 Directors Marc J. Francis and Max Pugh and Plum Village monastics in the Walk With Me premiere at SXSW, Austin, Texas. Photo from “Walk With Me” Facebook page.

Walk With Me drew enthusiastic praises from film critics who covered the festival. Nick Allen of rogerebert.com, for example, gave high marks to the voice of Cumberbatch: “His voice is another ingredient to the stillness of the project, delivering the endless poetry with his baritone voice, extremely mindful of delicacy and warmth.” 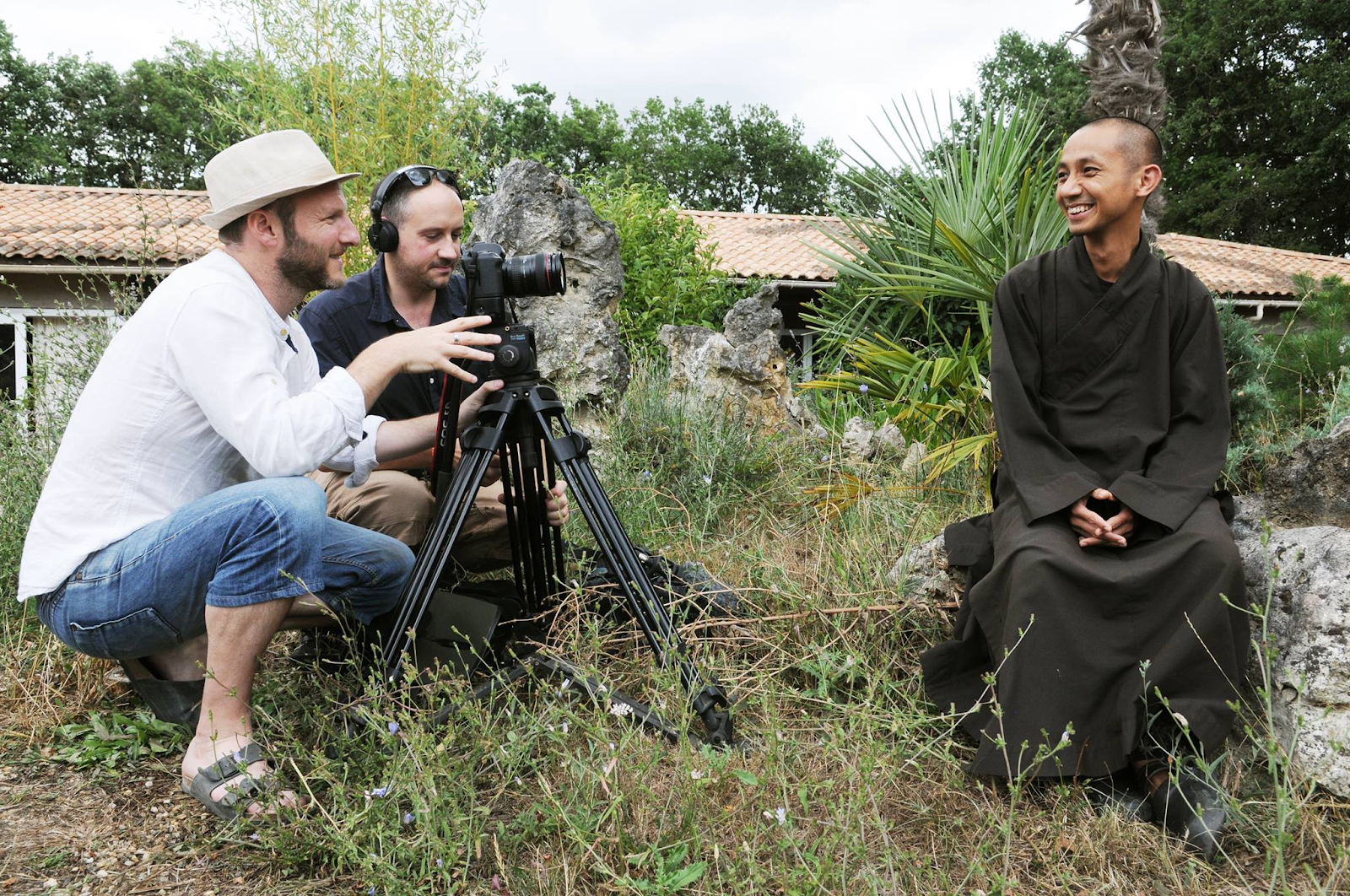 Directors Marc J. Francis and Max Pugh interviewed brother Pháp Cầu in Plum Village for Walk With Me. Photo from “Walk With Me” Facebook page.

“Every technique is deployed by the filmmakers to forcibly lull the viewer into a meta-meditative state, from static camera montages of sunsets over Gallic woodland to the omnipresent score by Germaine Franco…Placed atop Francis’ becalmed, natural lighting-heavy photography (these images boast unceasingly beautiful coloration work by Chris Rodgers), the score helps to suggest an alternate reality without discomforts, anxieties, or miseries”, Sean L. Malin observed on the Austin Chronicle. And Fionnuala Halligan of screendaily.com summed it up eloquently  “this documentary is not on a mission to give any answers – its main urge is to remind the viewer of the importance of the here and now, of the thunderous nature of silence”. 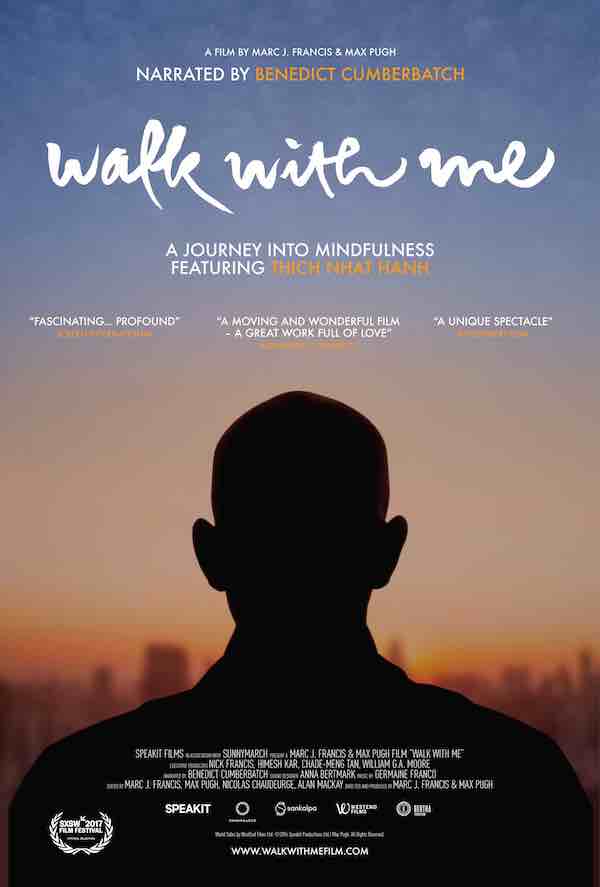 Walk With Me Poster. Photo provided by Gathr Films.

Walk With Me US public premieres started August 11 at the Rafael Film Center in San Francisco with other premieres follow in New York, Los Angeles, and Boulder, Colorado. At the premiere in San Francisco on Saturday, August 12, Directors Max Pugh and Marc J. Francis will be present with Sister Dang Nghiem from Plum Village Monastery, for Q&As and discussions.  Moviegoers who attend the New York premiere at the Rubin Museum of Art on Friday, August 18, will also have a chance to speak with the filmmakers and some of the monastics featured in the film. Those who choose to see the film on Saturday, August 19, will have an opportunity to meet up with Plum Village monastics in Union Square for a walking meditation to the theater. Some of these earlier premieres have been sold out while other shows may still be available for booking below.

Gathr Films and Kino Lorber won distribution right of Walk With Me in the U.S.  Gathr is a new web-based service that enables people to request their own theatrical screenings of a movie that otherwise would not be available to play at a theater near them.

Xóm Dừa Sangha, a community of mindfulness practitioners in the tradition of Thich Nhat Hanh in Orange County, has arranged with Gathr to host a “Walk With Me” screening at 7:30 PM, Thursday, September 14, 2017 at the AMC at the Block in City of Orange,  Orange County. Tickets for this event can be purchased here: http://bit.ly/2fnJhbn.

Nụ Hồng Sangha will host two “Walk With Me” screenings to celebrate Thay’s continuation at 7:30 PM, Wednesday, October 11, 2017 at:

You can also buy tickets for other screenings below.
In Orange County:http://bit.ly/2h0X8Vr

Tickets won’t be sold at the theater. Moviegoers should reserve or buy tickets via the above links. Please visit here for the movie trailer: http://bit.ly/2wBfCiS
Or read critic reviews and write your own audience review here: http://bit.ly/2vWkYbk